Home/Illusions/Ancient Illusions; It’s All Greek To Me
Previous Next

I recently watched a well-done documentary on the architectural marvel, the Parthenon. Feel free to watch the whole program on PBS’s website. If you do, you can skip this post, because I’ll paraphrase just a part of the documentary here that deals with illusions. 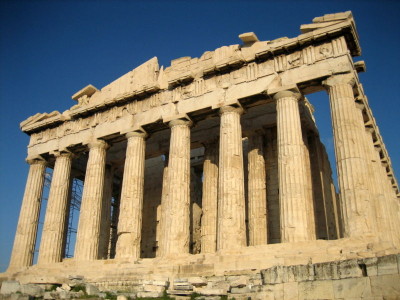 As you can see from a close look at this picture, the columns are made up of multiple stacked “drums.” Recently, while the Acropolis Restoration Project was attempting to rebuild the 46 columns, it was discovered that the drums had very slightly different diameters. This finding suggested that the columns were not straight, but were curved (wider at the bottom). In fact, very few of the parts of the temple had a straight line to it, even the foundation was “bowed.”

Amazingly, it was determined that the ancient Greeks were aware of optical illusions and used them in the architecture of the Parthenon. The building was a tribute to the goddess Athena and was built to be a symbol of perfection. They realized they must use optical illusions to create a temple that appeared perfect. You could even say that they incorporated optical “refinements” rather than illusions. The intended purpose of these refinements has still not been determined. Many believe they give a lifeless edifice an appearance of a living and breathing creation.