I remember getting my first pair of glasses at 14 years old. When my optometrist recommended them, visions of being called “four-eyes” and random punchings by the many prominent bullies at my school filled my mind. To make things worse, just a few months after getting my glasses, my orthodontist recommended braces! A very traumatic childhood indeed. 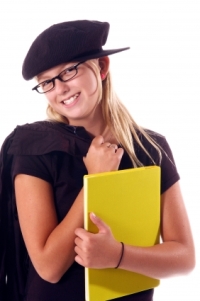 Research to the rescue! Kids may have a few less social problems to worry about in light of a new study.1 42 girls and 38 boys were shown various pairs of pictures of children, which included one child with glasses and the other without. About two thirds said the children wearing the glasses looked smarter and 57 percent said they looked more honest.

In my personal and professional opinion, children are not very interested in looking smarter or more honest when I tell them they need glasses. Kids mostly just want to fit into social circles with their peers. This is where the study results get interesting. Despite a child’s social fears with glasses, the researchers did not find any significant preference in who they’d rather play with, who looked better at sports, who looked more shy, nor who was better looking.

In the exam room, I find that girls tend to be more accepting of glasses. In fact, occasionally I’ll exam a child that attempts to trick me into thinking they need glasses. These children are almost exclusively female between seven and 13 years old and later admit that one of their friends just got glasses. They squint and strain to make out the biggest “E” I have despite the computer analysis of their eyes showing they have little or no need for corrective lenses. As a doctor, I can’t just assume the child is not being truthful. So after a battery of tests to verify eye health and by using some tricks of the trade to ensure good visual performance, I notify the parent in private without embarrassing the child. Hey, it’s rough being a kid these days.