The other day my four-year-old asked me out of the blue, “Dad, why do we have eyebrows?” I was baffled for two reasons: 1) that my son was so pensive and 2) that despite being an eye doctor, I didn’t have an immediate, scientific response. I replied how any baffled parent would and shot the ball to his court, “Why do you think we have eyebrows?” He replied after a brief pause, “So we don’t look funny.”

Eyebrows are one of those things that we take for granted until we have to do without them for a while. After doing some searching, I found many stories from individuals who, for one reason or another, had their eyebrows removed. Many said that liquids like sweat or rain would run right into their eyes. So that’s reason #1 for the existence of those furry things on our face. The arching shape and sideways hair growth direct liquids and debris away from the eyes. 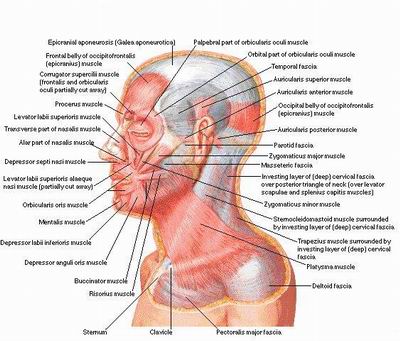 A less critical, but important social function is to aid in facial expression. Communication of emotions such as surprise, fear, and displeasure is executed with the eyebrows. If you’re interested in facial muscle anatomy and the expressions of each muscle, visit artnatomia.com to play with a simulator. The picture shows all superficial muscles that control facial and scalp movement. (Courtesy: www.medicalook.com)

EDIT (June 2, 2008): A recent U.S. study from the journal Plastic and Reconstructive Surgery indicates that eyebrow shape was deemed to be the greatest indicator of mood, drooping of the eyelids was considered the biggest indicator of tiredness, and raising the lower eyelid and the presence of crow’s feet were associated with happiness.

Those individuals with the fortune (or misfortune, depending on your perspective) of having one long, continuous eyebrow perhaps have the best eye protection. So think twice before you wax that unibrow into two brows. By the way, the fancy-schmancy scientific term for unibrow is synophrys.